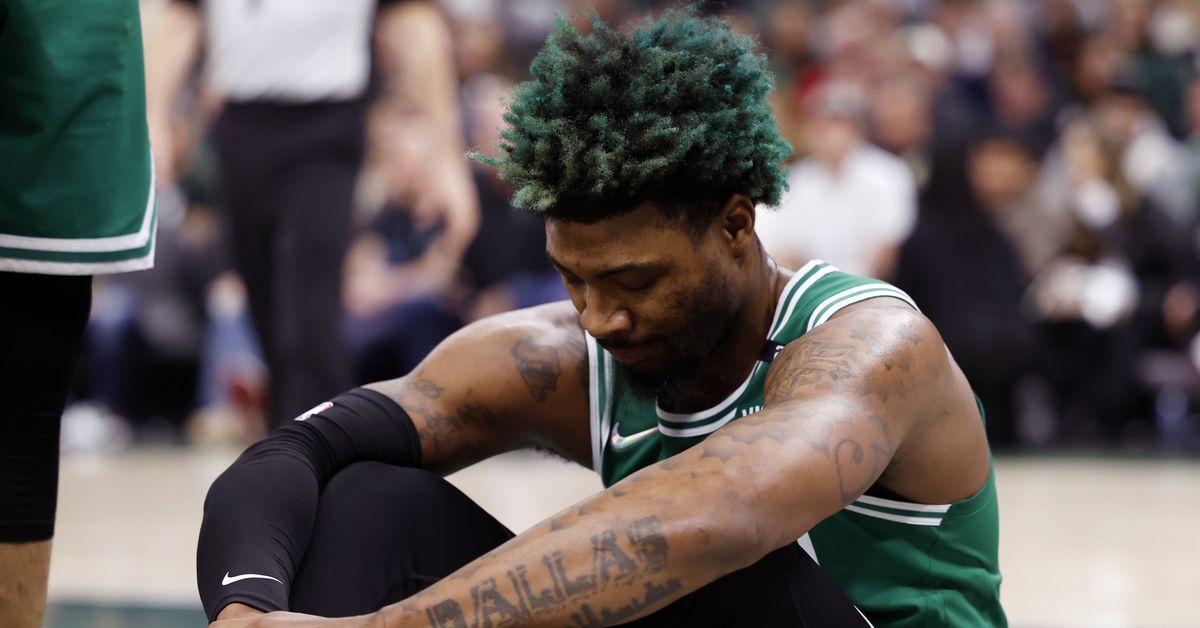 When the Celtics fell behind by as many as 14 points late in the third quarter in Game 3 on Saturday, a comeback seemed highly improbable.

Jayson Tatum was like Calvin Cambridge without his sneakers. Giannis Antetokounmpo was essentially Godzilla. Al Horford couldn’t do everything. But these aren’t the 2021 Celtics. This team has consistently shown resolve and moxie over the last few months, and this was simply the latest example as they stormed all the way back to even take a lead late in the 4th quarter.

The Celtics ultimately fell, 103-101, but they left feeling as though they were one or two breaks – or calls – away from an entirely different outcome and a series lead with home court advantage.

Here’s a closer look at the final minute of a wild one in Milwaukee.

After Grant Williams secured an offensive rebound, Tatum drew a double team and wisely found a wide-open Marcus Smart. There was no doubt Smart was shooting a 3 on this one, but his attempt went in-and-out and left the Celtics up 1 with 51.4 remaining. This was the right read all around and a high-percentage shot.

It would have put the Celtics up 4 and firmly in control, but it just didn’t fall. Williams, Tatum and Smart shot 7-for-36 on the night, including 2-of-16 from 3, and it eventually caught up to the Celtics.

Williams almost grabbed another rebound, but the ball ricocheted out of bounds as he screamed in frustration.

After a Bucks timeout, the Celtics elected to put Williams on Antetokounmpo. Pat Connaughton found Antetokounmpo, and the Celtics chose not to double initially. That worked in Game 2, but Antetokounmpo cracked the code in Game 3 as he relentlessly attacked over and over.

He stepped past Williams with relative ease and there wasn’t much Smart could do to alter the shot. Antetokounmpo made the right play and was simply too big, too athletic and too Giannis. The Bucks took a 101-100 lead with 44.3 left.

This one is interesting. Jaylen Brown played an excellent game and was in attack mode all night himself. He had some costly turnovers in the second half, but overall, he was terrific and helped keep the Celtics afloat.

Connaughton denied the inbound pass to Smart, so Brown brought the ball up and had to make a pivotal, split-second decision. He could pull it out and work the ball around or he could play to his biggest strength and drive to the hoop.

Brown chose the latter, with a tricky stop-and-go move, and he beat Jrue Holiday to the rim. Earlier in the game, Brown excelled getting into the lane, drawing doubles and finding his teammates. His pass at the end of the half to hit Williams in the corner for a 3 exemplified how much better the Celtics are when he’s a consistent playmaker.

In this instance, it appeared as though the Bucks almost baited him into forcing an ill-advised layup. Antetokounmpo closed and Brown took it right at him and Brook Lopez but hit the rim on an off-balance shot. He nearly got his own rebound, but Holiday corralled it. It’s easier said than done, of course, but it might have been in Brown’s best interest to wait for something better to develop.

With a 12-second differential, the Celtics made the right decision not to foul. Tatum switched onto Holiday and the Bucks spread the floor and gave him space to operate with Wesley Matthews and Connaughton in the corners. The Celtics trusted Tatum to slow him down with help ready as needed.

At first, Tatum stood his ground. When Holiday made his move, their arms got tangled and Tatum hit the deck. Replay appeared to show that Holiday did, in fact, push off, but it was a bang-bang play and was probably a good no-call given the circumstances. Horford almost got his hand in there, but Holiday floated one up and in to put the Bucks up 3 with 11.2 remaining. Holiday is crafty and clutch, and he hit the most timely shot of the night.

The Celtics called timeout and went with their best closing lineup in this series: Smart, Brown, Tatum, Williams and Horford. Matthews, who was the unsung hero of Game 3 for his lockdown defense on Tatum (yes, he did undercut Derrick White earlier), didn’t give him any breathing room once again.

Smart found Brown, who penetrated and pulled it back out. He found Smart, who was immediately fouled. The question became whether he was fouled shooting a 3 or on the floor. Given the situation, and Smart’s proclivity for taking big shots, it logically made sense that he was shooting. The Celtics certainly thought so.

NBA officials ruled this a ‘sweeping’ move and not a shooting motion by Marcus Smart.

Should this have been 3 free throws for Smart? pic.twitter.com/4yJwwpkzvU

Celtics coach Ime Udoka, holding the ball in hands, replicated the shooting motion to indicate that his guy was rising up. The refs didn’t bite, instead calling Holiday for a non-shooting foul. It’s impossible to know what Smart was planning, but it did appear he was firing away.

Udoka stuck up for his Defensive Player of the Year and referred to it as a “bad missed call.” Brown said he thinks the refs “missed one.” Smart made it clear he was shooting.

“It wouldn’t make sense to do a rip-through move behind the 3-point line when you’ve got a clear shot down 3,” Smart said afterward.

Ime Udoka on the Marcus Smart play late in the 4th: “It was a foul… poor no call… Bad missed call.” pic.twitter.com/C2OATuxlL3

Smart made the first with 4.6 seconds left and the Celtics correctly decided to have him miss the second. It was a truly masterful miss, and Smart swooped in for the rebound and got up a decent off-balance look. Robert Williams nearly tipped it home, then Horford almost did as well, but it came just after the whistle. Good call. Brutal loss for the Celtics. Big win for the Bucks.

The final minute was more about Antetokounmpo and Holiday’s greatness than anything else, but the Celtics did have a few legitimate gripes as well.

“Some calls didn’t go our way,” Brown said. “Obviously we’re upset about that. But it’s over now and we move on.”