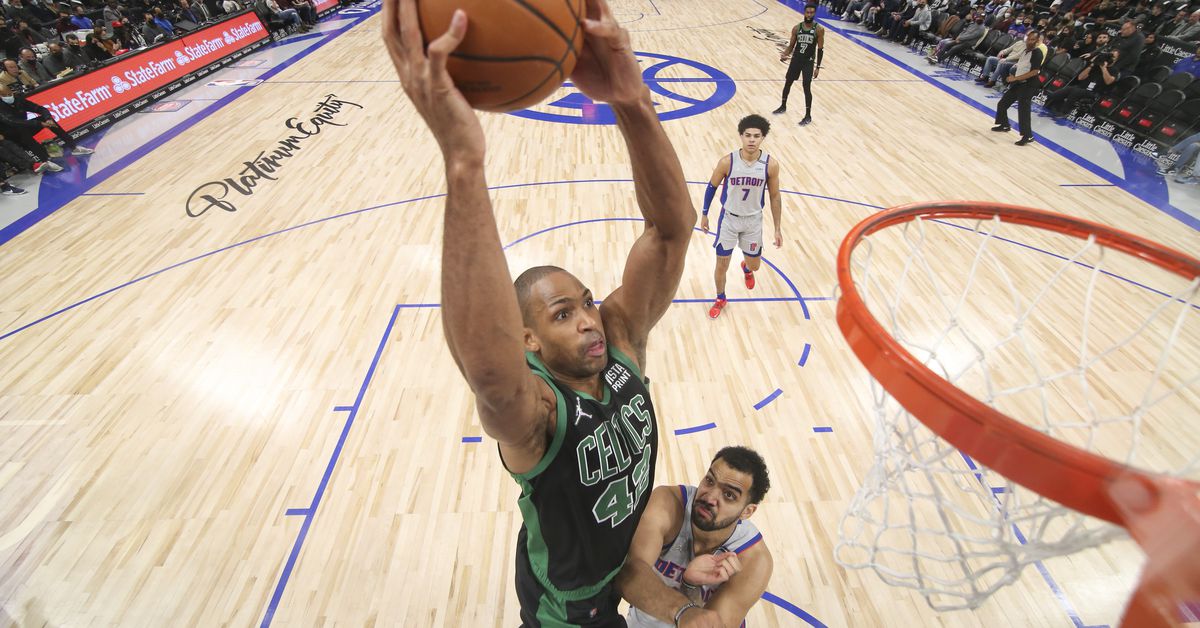 The Celtics have been hot and the Detroit Pistons have not, so it was no surprise tonight that Boston never trailed in winning the opener of a three-game road trip, 102-93.

The Celtics front-line rotation players held the Pistons to under 30% shooting, while the offense was led by Jayson Tatum’s 24 points (without needing to play in the fourth quarter). Robert Williams had 5 blocks to key the team defensive effort. A last-ditch run by Detroit against the Boston bench made the final score closer than the game actually was.

In securing their first four-game win streak this season, the Cs have also now won six of their last seven and 11 of the last 15. Their record is 29-25.

This was Boston’s first meeting this season with Pistons, who came into the game with a 12-39 record, next-to-last in the East. Detroit was without Josh Jackson and last year’s overall no. 1 draft pick Cade Cunningham, both out with injuries.

The Celts began with a quick 7-0 burst, which set the tone for the first quarter. Boston built a double-digit lead behind 10 points from Jaylen Brown, who was also hit with a technical for complaining about a marginal foul call. Highlights of the period included a fourth-chance basket by Romeo Langford, and these two gems:

The Celtics’ defense continued to smother the Pistons, whose shooting dropped below 30% as they fell behind by 16. Tatum joined Jaylen in the technical foul category, getting T’d up after a lack of calls on his drives to the rim. No one was getting calls, however — the Cs attempted just 8 free throws in the half, and the Pistons had only 4.

A pair of Marcus Smart hoops to open the third pushed the lead to 50-31, but Detroit didn’t give in. Jerami Grant and Hamidou Diallo led a Pistons rally, and when the Celts failed to rebound a missed FT, Saddiq Bey buried a gift three. The margin was down to 57-46 and Ime Udoka called a frustrated timeout.

Tatum answered the call by draining a pair of triples. Then Smart’s hustle play saved a loose ball, and Grant Williams finished the possession by drilling a corner three. Tatum also had not one, but two flying jams. Here’s the second.

The lead peaked at 22 as Tatum took over with 19 points in the period. Diallo had 13 for Detroit in the frame, but after three, it was Boston by 78-56.

The Celtics lead grew to 24 in the fourth quarter. Udoka went to the deep bench and they didn’t get much done. A 10-0 run brought Detroit to within 12, but Payton Pritchard’s jumper stopped the bleeding momentarily. However, the lead continued to shrink to just 7 before time ran out on the comeback.

The Celtics will continue their three-game road trip against the Orlando Magic on Sunday, 6 p.m. EST on NBC Sports Boston.

For more postgame coverage of the Celtics’ win, tune into the Garden Report Postgame Show LIVE on CLNS Media right after the game. Join A. Sherrod Blakely, Bobby Manning, Josue Pavon, Jimmy Toscano and host John Zannis for a full breakdown. Plus, the guys will discuss Boston’s smothering defense.