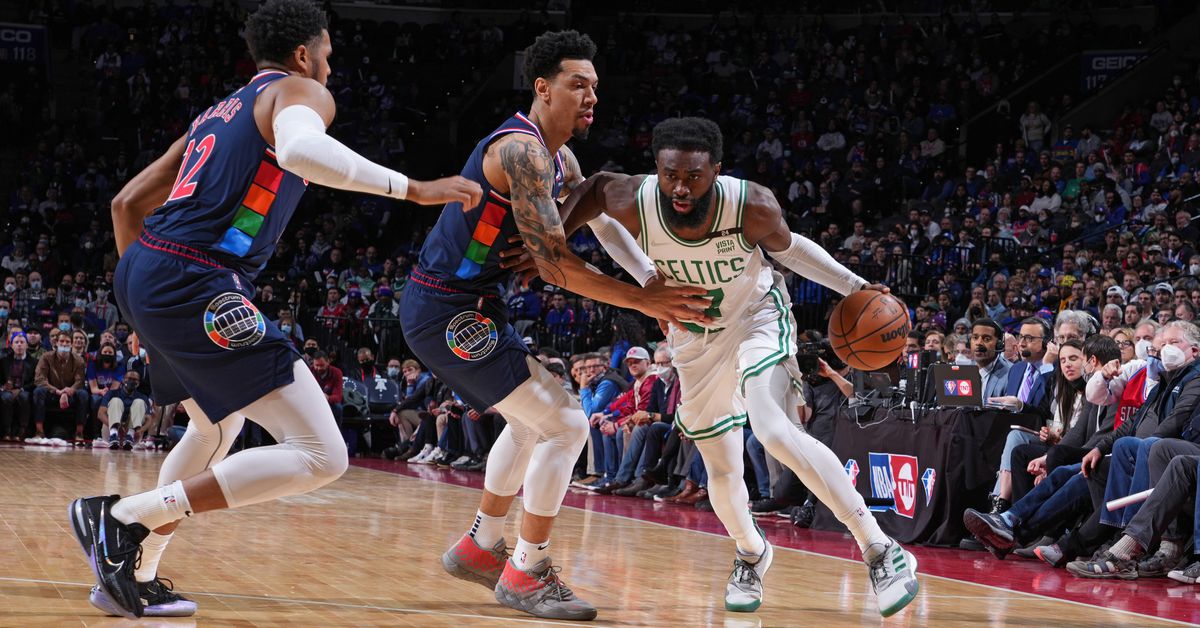 During their recent win streak, the Celtics were being dismissed by some as not having beaten any “good teams.” However, the critics can’t say that anymore, not after tonight.

The Cs destroyed the Philadelphia 76ers on their own floor, 135-87, for Boston’s ninth straight victory. The Celtics never trailed and led by as many as 50+ points, prompting the crowd to boo the home team.

Better yet, the win improved the Celtics’ record to 34-25 and brought them within one game of the Sixers (34-23) for fifth place in the East. The only negative on the night was Marcus Smart suffering a sprained right ankle.

Simply put, everyone was hot for Boston. Jaylen Brown and Jayson Tatum combined for 57 points on 19 of 34 shooting. Grant Williams made 4 of 5 threes. The key team stats were 46 of 82 field goals, a franchise record 25 of 45 three-pointers, and 28 assists.

Robert Williams was a late-day scratch due to right calf tightness. It seemed bad timing, since Embiid leads the NBA in both points and free throw attempts per game. Grant started in Rob’s place. Also, the Daniel Theis trade paperwork was completed in time for the big man to make his debut 2.0 in green. James Harden is not yet active for the Sixers.

As they’ve done often during the streak, the Celtics got off to a fast start, leading 7-0 and 11-2 before Philly called time. Jaylen scored 8 of those 11. The Sixers regrouped as Embiid began getting to the line (7 of 8 free throws in the quarter). Boston stayed in the lead thanks to deadly shooting — 10 of 18 and 6 of threes — and their defense (Philly just 6 of 19 and 3 of 8 at the arc). The lead was 32-22 going to the second.

With Embiid on the bench, Tatum ran off 7 straight points (a contested triple and 4 FTs), pushing the lead to 39-22. The Celtics kept on attacking, and when Aaron Nesmith (10 minutes in the half) hit a three in transition, followed by Jaylen burying a deep heat check trey, Boston led 52-28 with 6:39 still to play before intermission.

Everything was going so well that when Doc Rivers challenged a foul call on Matisse Thybulle, the call stood.

Then with the score 55-31, Smart drove to the hoop, stepped on Embiid’s foot, and twisted his ankle. Smart shot the free throws, missing both, then limped to the locker room, out for the rest of the night.

At that point, the Sixers began to fight back, running off 10 straight to cut their deficit to 58-41. Where a couple of months ago this would’ve been the beginning of a collapse, the Celtics kept their composure. They reeled off the last 9 points of the quarter, including a buzzer-beating, heavily contested three by Jaylen, to lead 69-42 at intermission.

The Jays themselves matched Philly’s halftime scoring output. Brown had 26 points, highlighted by 5 of 5 at the arc, and Tatum added 16 with 7 rebounds. The team shooting splits were a scorching 56%/63%/77%.

The Cs stayed white-hot in the third, scoring 8 straight in the opening minutes. Then Derrick White snatched a loose ball and laid it in with the foul — a three-point play plus a technical on Philly’s Danny Green. A minute later, Al Horford found White with a long outlet pass, and the sneakaway layup put Boston ahead by an unimaginable 85-48 score.

And still the lead grew: Tatum buried a three and it was 101-56, a 45-point lead. Boston won the third quarter, 32-16, and the entire fourth quarter was truly garbage time.

The Celtics have one more game before the All-Star break, hosting the Detroit Pistons in Boston tomorrow at 7:30 p.m. EST, televised on NBC Sports Boston and League Pass.

For more postgame coverage of the Celtics’ demolition of the Sixers, tune into the Garden Report Postgame Show LIVE on CLNS Media right after the game. Join A. Sherrod Blakely, Bobby Manning, Josue Pavon, Jimmy Toscano and host John Zannis for a full breakdown. Plus, the guys will discuss the Celtics’ steady climb up the standings and Marcus Smart’s injury.