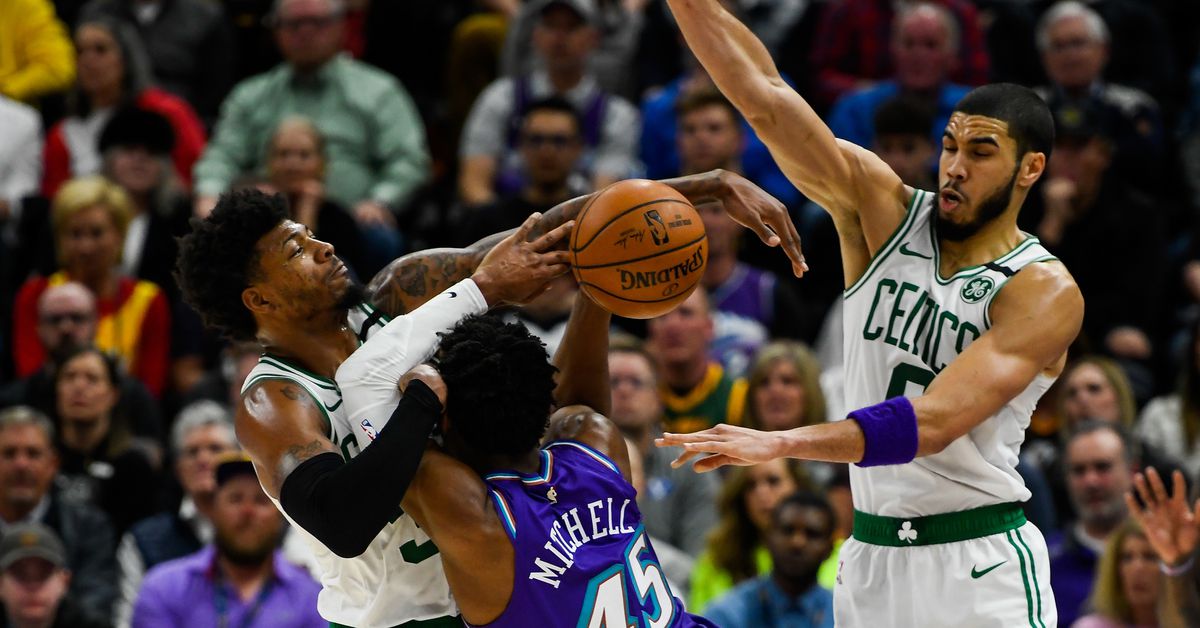 The Celtics begin a 5 game Western road trip with a stop in Utah. They will play the Trail Blazers, Lakers, Clippers, and Phoenix before they head back home again. They are playing in the first of back to back games and will play Portland on Saturday. The Jazz are playing the last game of a 4 game home stand and will start a 4 game Eastern road trip on Sunday.

This is the first of 2 games between these two teams this season. They will face off again in Boston on March 23. The Jazz won the series 2-0 last season. The Celtics lead the all time series 58-44 but they are 22-29 when they play in Utah. Utah lost 4 of 5 games before winning 6 of their last 8 games. The Celtics have won 5 of their last 7 games.

After one game with everyone available, Jaylen Brown has been listed as out for this game as they continue to manage his hamstring injury. At one point, he grabbed his hamstring in Wednesday’s game against the Sixers and so they are likely being cautious. I am guessing that Dennis Schroder will once again start in his place. For the Jazz, Udoka Azubuike (ankle) and two way player Trent Forrest (illness) are both questionable.

Dennis Schroder vs Donovan Mitchell
Mitchell has been the Jazz’s best player so far this season. He is averaging 23.2 points, 4.3 rebounds, and 5.1 assists. He is shooting 43.4% from the field and 35.9% from beyond the arc. The Celtics will definitely miss Jaylen Brown here, but Schroder played very well when filling in for Brown in previous games and hopefully can play well on both ends of the court in this one.

Al Horford vs Bojan Bogdanovic
Bogdanovic is averaging 16.9 points, 4.1 rebounds, and 1.9 assists. He is shooting 46.1% from the field and 39.7% from beyond the arc. He is always a threat to score from three and so the Celtics have got to defend the perimeter well. Al is coming off one of his best games this season, especially defensively and the Celtics will need that energy and high level of play from him in this game as well.

Honorable Mention
Robert Williams III vs Rudy Gobert
Gobert is averaging 15.1 points, 14.5 rebounds, and 2.1 blocks per game. He is averaging 64.9% from the field and has not hit any three pointers this season. He does a lot of damage inside, whether it is points in the paint or blocking shots or grabbing rebounds. Robert needs to stay with him inside and try to keep him off the boards and from dominating in the paint.

Rebound – Much of rebounding is effort and when the Celtics put out that effort on the boards, we see it in the other areas of their game. The Celtics are averaging 47.2 rebounds per game (4th) while the Jazz are averaging 46.5 rebounds per game, which is 7th in the league. If the Celtics want to win this game they need to crash the boards and out-rebound the Jazz. They especially need to box out Gobert to keep him from grabbing all the rebounds.

Play 48 Minutes – The Celtics can’t afford to dig a hole at the beginning of the game and they can’t let up at the end and lose focus and miss shots and allow the Jazz to score at will. They also can’t afford those periods in the game where they turn the ball over and lose their focus. They have to play hard from the opening tip to the final buzzer. We have seen spurts in each game where they go on a run and look very good but they also have spurts when they turn the ball over and can’t make a shot. They have to be consistent and play all 48 minutes at full effort and focus.

Focus on Making Shots – The Celtics need to focus more on making shots and not look for fouls that aren’t going to be called. The Celtics have struggled to hit their shots in almost every game so far. Even players like Jayson Tatum that we know can hit shots has been way off in most games this season. Every player needs to stay focused and make their shots because they will need to score to get past the Jazz.

X-Factors
On the Road – The Celtics are playing in the first game of a 5 game Western road trip. They have to stay focused on playing Celtics basketball and block out all the distractions that come from playing on the road like travel, playing in a different time zone, staying in hotels and a hostile crowd. The Celtics need to keep their focus and play hard with no let up.

Officiating – Officiating is always an x-factor. Will they let them play or will they call every ticky tack foul? Will they favor the home team? We never know what any given crew will do. The Celtics need to stay focused and not allow bad calls or lack of calls take them out of their game.