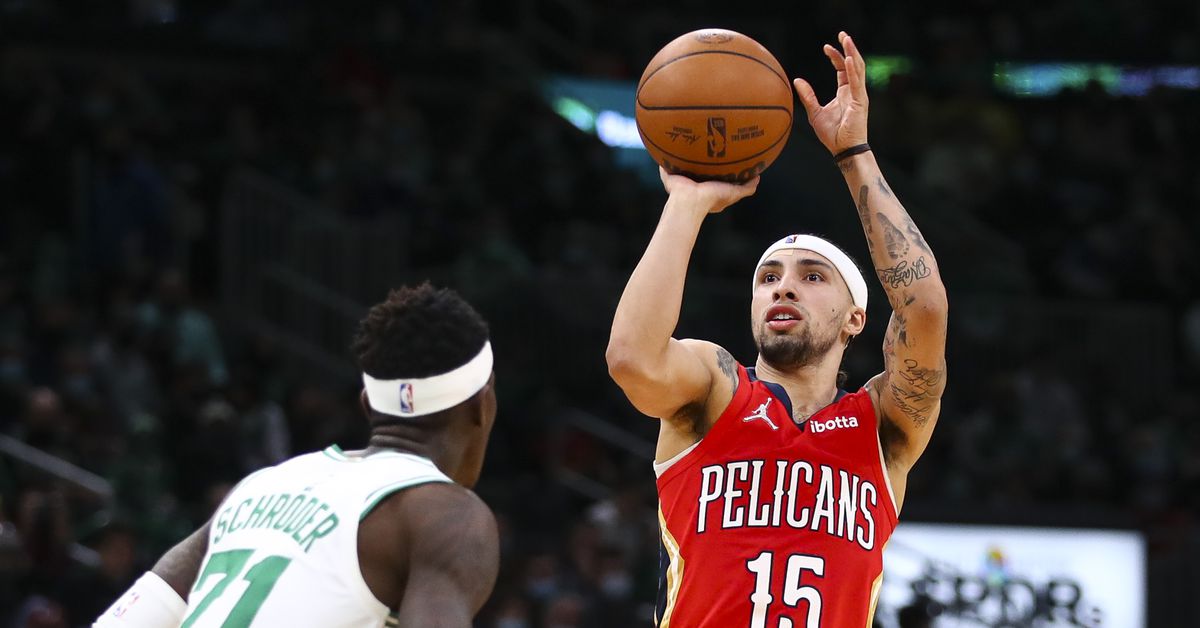 The Celtics continue their back to back road trip as they visit the New Orleans Pelicans. This is the second and final meeting between these two teams this season. The Celtics won the first meeting in Boston 104-92 on January 17. The Celtics were without Marcus Smart and Robert Williams while the Pelicans were missing Kira Lewis, Jr, Didi Louzada and Zion Williamson, who has yet to play for the Pelicans this season.

The Celtics are 8th in the East. They are 9-15 on the road and 6-4 in their last 10 games. They are 8-11 against Western Conference teams. The Celtics are tied with 9th place Toronto and 1 game ahead of both 10th place Washington and 11th place Atlanta. They are 1.5 games ahead of 12th place New York. They are 2 games behind he 7th place Hornets and 5 games behind the 6th place Bucks.

The Celtics are still at almost full strength with just Bol Bol (foot) and PJ Dozier (knee) on the injury list. The Pelicans played short handed on Friday night and may very well be short handed against the Celtics. Kira Lewis, Jr (knee), Trey Murphy III (covid), Didi Louzada (covid) and Zion Williamson (foot) are all listed as out. Brandon Ingram missed his his 3rd game on Friday with a sprained ankle and is out for this game also. Jonas Valanciunas has missed 2 games with a non-covid illness and is out for this game. Devonte Graham is probable for this game after dealing with a sprained ankle on Friday.

Marcus Smart vs Devonte Graham
Graham is averaging 14.1 points, 2.6 rebounds, 4.5 assists and 1.1 steals per game. He is shooting 37.1% from the field and 36.2% from beyond the arc. The Celtics need Marcus Smart to continue to push the pace and find the open man and keep the Celtics in attack mode against Graham.

Robert Williams III vs Willy Hernangomez
Hernangomez is averaging 8.6 points, 6.8 rebounds and 1.2 assists per game. He is shooting 57.9% from the field and 60% from beyond the arc. However, he shoots only .21 three pointers per game. In the last two games as a starter, he is averaging 23.5 points, 13 rebounds and 2 blocks per game.

Keys to the Game
Defense – Defense will always be the key to winning. The Pelicans average 105.7 points per game while the Celtics average 108.0 points per game. The Celtics must play tough defense to slow down the Pelicans’ scoring if they want to win this game. The Celtics are 4th in the league with a defensive rating of 106.4. The Pelicans are 22nd with a defensive rating of 111.6. The Celtics must make defense a priority to get a win. The Celtics allowed the Hawks to shoot 46% from the field and 39% from beyond the arc on Friday and they have to do better than that on defense in this game.

Rebound – The Celtics have to crash the boards as a team. Rebounding takes effort and when they put that extra effort out to dominate the boards, it often translates to all other areas of the game as well. The Pelicans are averaging 45.7 rebounds (9th) and the Celtics are averaging 46.2 rebounds per game (5th). The Pelicans are 10th in the league with 14.0 second chance points and so the Celtics are going to have to work hard to keep them off the boards to keep them from scoring second chance baskets.

Push the Pace and Move the Ball – Two things that helped the Celtics to two dominant wins over the Wizards and Kings were the fact that they picked up the pace and pushed the ball up the court. They also moved the ball and were aggressive in getting inside. The Celtics need to continue to do both of those things in order to keep winning. They can’t play hero ball and they can’t just walk up the court. They have to run and get into their offense before the Pelicans defense gets set.

Stay Focused – The Celtics seem to lose focus at times and when they do, they struggle on both ends of the court. The Celtics turned the ball over 16 times against the Hawks and they have to focus more on their ball handling and on their passes and not give their opponents free possessions by turning the ball over. They also shot just 35% from the field and 19% from beyond the arc against the Hawks. They have to stay focused on taking good shots and on making them.

Be Aggressive – The Celtics have got to be aggressive in going to the basket, playing defense, diving for loose balls and just play harder. In their losses, it is often because they let their opponent play harder than them. Their effort and aggressiveness can make them very tough to beat and their lack of it can make them vulnerable. They are once again facing a team that is under .500 and they can’t afford to come out with less than 100% effort. They have to give every game their maximum effort as a team.

X-Factors
Back to Back On the Road – The Celtics are just 9-15 on the road this season. Whether it is the travel, hotel living, or an unfamiliar arena and hostile fans, the Celtics have not played their best on the road. They need to come in focused and not allow the distractions of playing away from home to keep them from playing their best. This is also the second of back to back games and so fatigue may come into play. However, the Pelicans are also playing on the second night of back to back games so they may face some fatigue also.

Underestimating Teams– Last season, Danny Ainge said that he felt that the Celtics were underestimating their opponents. This could be said about this current team also. They seem to play down to their opponents much of the time. We know that when the Celtics play team ball and play with max effort, they are tough to beat. They cannot expect to beat teams just by showing up. They have to respect every team as one that can beat them on any given night. They can not underestimate this Pelicans team.

Officiating – Officiating always has the possibility to be an x-factor. Every crew calls the game differently. Some call every bit of contact while some let them play. Some favor the home team and some call it evenly and some are just bad. Hopefully the Celtics get a crew that calls it even and lets both teams play. However the game is called, they need to focus on the game and not allow bad or no calls take that focus away