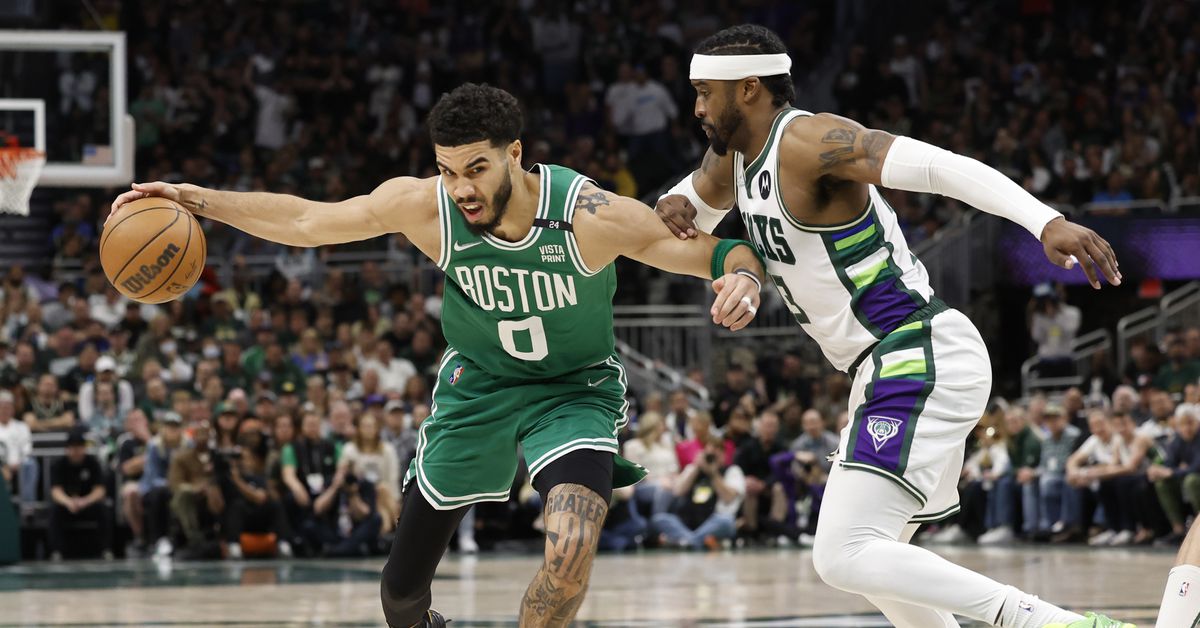 Coming off a very disappointing 2 point loss in Game 3, the Celtics look to even the series with a win in Game 4. The Bucks won the first game convincingly 101-89 in Boston to steal home court from the Celtics. The Celtics defense was good, but their offense was way off, shooting just 29.4% on two pointers and 36% on threes but shot 50 threes for the game. They also allowed the Bucks to get 27 points off of 18 Celtics turnovers in the game.

The Celtics returned the favor in the second game, beating the Bucks 109-86 also at Boston. The Celtics defense was excellent in this game, holding the Bucks to just 86 points and limiting the production from Milwaukee’s players other than Giannis. The biggest change in this game was that their offense was much better. They shot 46.5% from beyond the arc and 47.5% from the field. The Celtics led by as many as 26 points and they never trailed in the game. The Celtics’ 20 three pointers were the most in franchise playoffs history.

The Bucks won Game 3 103-101 behind 42 points from Giannis Antetokounmpo and 25 points from Jrue Holiday. Once again, the Celtics struggled on the offensive end. They shot just 36.8% from the field and 27.3% from beyond the arc. Jayson Tatum scored just 10 points and struggled throughout the game. The Celtics reverted to some old bad habits in the 3rd quarter, losing composure, taking quick shots and missing defensive assignments and scoring just 17 points in the quarter and falling behind by as many as 14 points. They fought back in the 4th quarter and came close to getting a win but fell just short.

Both teams got a player back from the injury list in Game 3. Marcus Smart returned for the Celtics after missing Game 2 with a quad contusion that he suffered in the first game of this series. Smart said that there were no problems with the quad during his 29 minutes in Game 3. George Hill returned for the Bucks after last playing on April 8. Jayson Tatum has been playing with a sore wrist for a couple of months and fell on it in Game 3 but is not on the injury list and is expected to play through it.

Jaylen Brown is also playing through injury as he grabs at his sore hamstring at least a couple of times each game. Robert Williams played just 23 minutes in Game 3 but appears to be fully recovered from the meniscus tear that kept him out for 4 weeks. For the Celtics, Sam Hauser has been ruled out for Game 4 with shoulder instability and Khris Middleton remains out for the Bucks with the knee injury.

Al Horford vs Giannis Antetokounmpo
Once again, the matchup with Giannis Antetokounmpo is the key matchup. In Game 1 vs Boston he had 24 points, 13 rebounds, and 12 assists. He did have to work for his points, however and shot just 9-25 from the field and 0-2 from beyond the arc. He also turned the ball over 5 times. However, he had 12 assists that resulted in 31 more points for the Bucks. In Game 2, he had 28 points, 9 rebounds and 7 assists, holding him to 11-27 shooting. He erupted for 42 points in Game 3 and also had 12 rebounds and 8 assists. Many of Giannis’ easy baskets were when he sought out Jaylen Brown or Jayson Tatum in switches. The Celtics need to limit switching Brown and Tatum on him on defense. They will need Al Horford and Grant Williams to once again limit his effectiveness in this game while also limiting his ability to find open teammates.

Marcus Smart vs Jrue Holiday
Holiday had 25 points (8-20), 10 rebounds, and 5 assists in Game 1 and followed that with 19 points, 4 rebounds and 7 assists in Game 2. In Game 3 he had 25 points, 7 rebounds, 3 assists and 3 steals. The Celtics need to play Holiday tightly on defense to limit his production since he is the biggest threat other than Antetokounmpo. Marcus Smart needs to be angry about the last game and come into this game determined to play the right way on both ends of the court. He needs to keep the ball moving on offense and limit the good shots that Holiday gets.

Honorable Mention
Jayson Tatum vs Wesley Matthews
In Game 3, the Bucks made a change in the starting lineup, starting Grayson Allen instead of Bobby Portis. Allen started at shooting guard and Wesley Matthews moved up to small forward. I’m going to guess that they will used this same starting lineup in this game. Matthews’ tough defense has been given much credit for Jayson Tatum’s struggles in Game 3. Jayson Tatum knows that the Celtics need him to be better and I expect a much better game from him in this one. The Celtics need to figure out how to get Jayson going in this game and how to solve Matthews’ defense on him.

Keys to the Game
Defense – Defense is always the biggest key to winning, and especially more so in the playoffs. Defense wins championships is not just a cute saying, it is a fact. This series has been a defensive battle so far with no team scoring more than 109 points and twice teams being held to under 90 points. This series will be won on the defensive end and the Celtics must work harder on defense and limit the Bucks’ scoring if they hope to win this series.

Rebound – Next to defense, rebounding is always a big key to winning. Rebounding takes effort and when the Celtics put out extra effort to win the rebounding battle, that effort usually continues to other areas of the game. The Bucks out-rebounded the Celtics 66-54 in Game 1 and 53-47 in Game 3. The Celtics out-rebounded the Bucks 40-37 in Game 2. In each game, the team that had the most rebounds win the game. The Celtics must out work the Bucks on the boards in order to win this game on the road.

Keep Moving – When the Celtics keep the ball moving and keep moving without the ball to get open, they are tough to beat. But, when they settle for quick shots and when they play hero-ball and have iso play after iso play, the offense gets bogged down and they struggle to score. The Celtics reverted to taking quick shots and not moving the ball in the 3rd quarter of Game 3 and that resulted in a 17 point quarter and a 14 point deficit. The Celtics must keep the ball moving and get up the court quickly to get easy baskets before the Bucks get their defense set and they have to trust each other and move the ball and not take quick shots.

Stay Composed – The Celtics seemed to lose their composure in Game 3 when things didn’t go their way. They went away from the ball movement and team play that has been so successful for them in the second half of the season. Players spent too much time complaining to the refs about calls and in at least two cases, that cost the Celtics when they didn’t get back on defense and the Bucks hit a 3 pointer. The Celtics have to play through the bad calls that are inevitably coming. They have to play hard and play together and not allow the pressure or the stress to take them out of their game.

Play Hard 48 Minutes – The Celtics played hard for just 3 quarters in Game 3. They allowed the Bucks to out-play them in the third quarter and that was the difference. The Bucks are too good for the Celtics to allow themselves to dig a hole and get behind by double digits. The Celtics must come out strong and take control of the game right from the opening tip and play hard right up until the final buzzer with no let up. If they give the Bucks an opening, they will take it and give the Celtics another loss.

On the Road
The Celtics are once again playing on the road and it takes extra concentration and extra composure to get a win in the opponent’s arena. The Celtics played very well on the road in the second half of the season, going 16-5 in their final 21 road games and beating opponents by 15.1 points per 100 possessions. The Celtics have to stay focused and not allow the distractions of the road and of a hostile crowd to take away their focus on playing the game the right way.

Officiating – The officiating can always be an x-factor and maybe more so in the playoffs than in the regular season. Some referees call the game tight and others let them play. Some favor the home team and others call it evenly. Some refs just seem to have an agenda that doesn’t fit the play on the court. And sometimes, like in Game 3, the refs are simply atrocious. Giannis seems to always get more than his share of calls as he plows through players on his way to the hoop, leaving bodies in his wake. He shot 32 free throws through 3 games, more than any player on either team. The Celtics have to play through however the refs call the game, whether it is tight or they let them play or they make terrible calls. Jayson Tatum and Grant Williams especially seemed to let bad officiating get to them in Game 3. The Celtics can’t allow bad calls or no calls to take away their focus on the game.

According to our friends at DraftKings, the Celtics are one-point underdogs for Game 4 in Milwaukee. Despite everything — the narrow losses in Game 1 and Game 3 — bettors still seem to be favoring Boston even though the Bucks hold a 2-1 series lead.

Like Game 3, the story tonight could again revolve around the officiating. As Tom Haberstroh notes, Boston is 2-10 in playoff games officiated by Tony Brothers since 2015. Physical play has been the headline of the series, but unfortunately, so has the inconsistent whistle and it’s an opinion shared by both teams.

All things considered, the outcome of Game 4 and the complexion of the entire series could rest on the shoulders of Jayson Tatum. Al Horford and Grant Williams will do what they’ve been doing against Giannis Antetokounmpo. Outside of a Game 2 explosion, both teams have been subpar from behind the arc and for the most part, three-point shooting has been taken out of the equation. Like Antetokounmpo in Game 3, Tatum will have to answer the call as the superstar he’s been since the start of the playoffs. After making just four of his 19 shots and matching three assists with three turnovers on Saturday, the Celtics will need the Tatum that destroyed Brooklyn in a sweep if they have any chance in Game 4 and beyond.

All odds are accurate at the time and date of publishing.