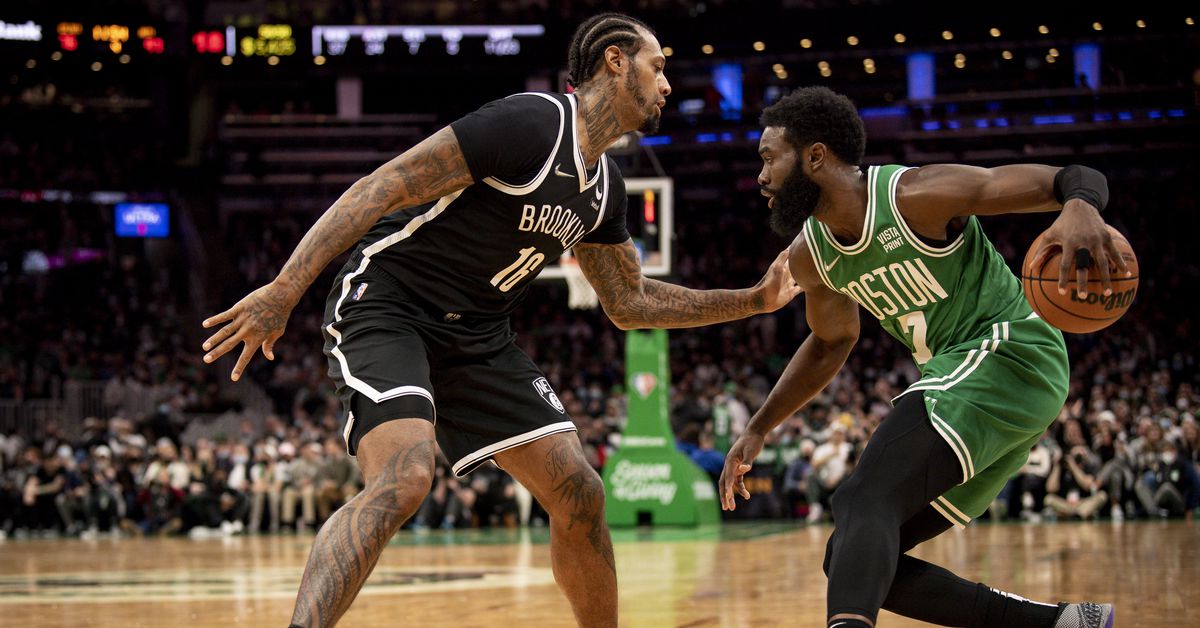 The Celtics complete their 3 game road trip in Brooklyn for the 2nd of 4 games against the Brooklyn Nets. The Nets won the first game between these two teams 123-104 in Boston on November 24. They will meet again in Brooklyn on February 24 and in Boston on March 6. The Celtics are 131-73 against the Nets all time. They are 60-40 on the road and 8-9 when playing in the Barclays Center. The Nets won the series 3-0 last season.

The Nets are in 7th place but tied with the Celtics and hold the tie breaker. They have lost their last 8 games and are 2-8 in their last 10 games. They are 12-13 at home but they are 17-11 on the road, likely because Kyrie plays on the road but can’t play at home. The Nets are 20-9 against Eastern Conference teams and 6-1 against Atlantic Division teams. This is a huge game for both teams for positioning in the standings.

The Celtics are playing in the first game at home after a 5 game Western Road trip where they went 0-5. They play this one home game and then will head out on the road for 2 more starting on Thursday in Washington. The Celtics are playing in the final game of a 3 game road trip where they have gone 2-0 so far. They will have two games at home beginning with Denver on Friday. The Nets have won their last 5 games at home against the Celtics.

The Celtics have just Bol Bol (foot) and PJ Dozier (knee) on the injury list at this time. After the Orlando game, Jaylen Brown was seen inspecting the wrist that he had surgery on last season but he downplayed that and apparently is ok. The Nets have 7 players out including their “big three.” James Harden has missed the last two games with a hamstring injury and has been downgraded to out for this game. Nicolas Claxton left Friday’s game against the Jazz after just 5 minutes and missed Sunday’s game. He is also listed as out.

LaMarcus Aldridge has missed 4 games with a sprained ankle and is out for this game. Kevin Durant is expected to be out until at least March 1 with a sprained MCL. Joe Harris is out after having surgery on his ankle. He may need a second procedure on it and will definitely be out for this game. Kyrie Irving remains unvaccinated and because of that is unable to play in the Nets home games. Finally, Paul Millsap has asked for a trade and is sitting out awaiting the trading deadline. The starting lineup I have listed here is just a wild guess with all the players out.

Marcus Smart vs Patty Mills
Mills is averaging 13.8 points, 2.1 rebounds and 2.5 assists per game. He is shooting 42.9% from the field and 39.3% from beyond the arc. He had a big game when the Celtics and Nets met on November 24. He put up 23 points and shot 7-10 on 3 pointers in that game. The Celtics need to defend him well to prevent a repeat of that production in this game.

Robert Williams III vs Blake Griffin
Griffin is averaging 6.8 points, 4.4 rebounds, and 2.1 assists, mostly off the bench. He is shooting 41.2% from the field and 23.7% from beyond the arc. Although he has slowed down considerably, he still is able to score in the paint if not defended well. Robert Williams should be up to that challenge.

Honorable Mention
Jayson Tatum vs Kessler Edwards
It says a lot about the Nets injury and other problems that they are starting one of their two way players. Edwards is averaging 7.7 points, 4.4 rebounds and 0.7 assists. He is shooting 43.3% from the field and 38.4% from beyond the arc. The Celtics need for Jayson Tatum to get back to hitting his shots and playing well.

Keys to the Game
Defense – Defense will always be the key to winning. The Celtics defense has been impressive in recent games and they need to continue to make defense their priority. They have moved up to 4th with a defensive rating of 105.5. The Nets are 19th with a defensive rating of 111.0. The Nets are 2-19 when they shoot a lower field goal percentage than their opponents so playing tough defense is key to getting a win. The Nets will be missing their top 3 players but that shouldn’t allow the Celtics to relax. They need to come out and play as if the Nets are all healthy and the top team in the league.

Rebound – In order to score, the Celtics need the ball and to get the ball, they will need to crash the boards as a team. The Celtics average 46.5 rebounds per game (3rd) while the Nets average 44.9 rebounds per game (15th). Much of rebounding is effort and when the Celtics put out extra effort on the boards, it usually carries over into the rest of their game. The Celtics must come into the game determined to work hard and to hustle for every rebound.

Don’t Underestimate – The Nets have lost 8 games in a row and will be missing their big 3 players. It would be easy for the Celtics to come in expecting to walk away with this game but they can’t have that mindset. The Nets are still a dangerous team if the Celtics underestimate them and come in playing less than their best, they could come out with a loss.

X-Factors
Losing vs Winning – The Nets have lost 8 in a row while the Celtics have won 5 in a row. A team that has a long losing streak gets more and more desperate for a win as the streak gets longer and they tend to play much harder to break the streak. On the other hand, a team with a long win streak may relax a little and not play quite as hard because they get used to the success.

Injuries vs Health – The Celtics are basically fully healthy unless an injury pops up last minute. The Nets are struggling with a lot of injuries. When a healthy team faces an undermanned team, sometimes they let up and expect to win without giving 100% effort. Like a wounded animal, teams that are undermanned often come out and fight harder and if their opponents underestimate them, they can get a surprise win.

Officiating – Just as defense will always be a key to the game, officiating can always be an x-factor. Will they call the game tight or will they let them play? Will they favor the home team? Will they be fair and call it even? The Celtics have to adjust to however the officials are calling the game and not lose their focus while complaining about calls because even in a well called game, there will be a few missed calls.