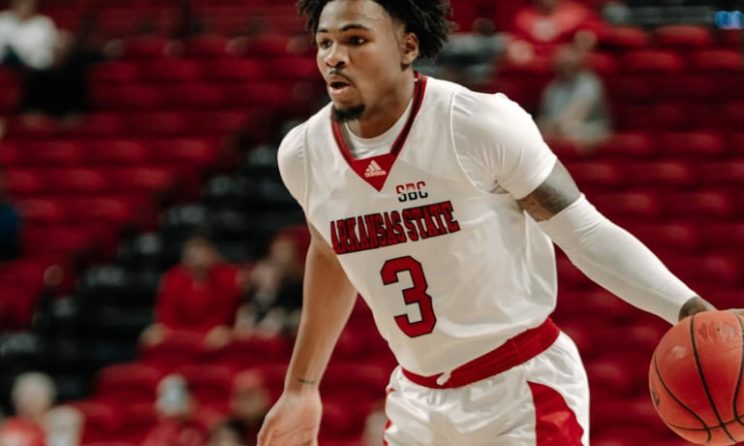 In three seasons at Arkansas, Henderson showed glimpses of potential, but never found a steady spot in the rotation. His most playing time came as a sophomore in 2019-20, when he appeared in 20 games, including six starts, and averaged 9.2 minutes. Following a second season under Musselman, Henderson entered the portal and remained the SEC by landing at Texas A&M. Through his first eight games with the Aggies, he’s been one of their top players off the bench in terms of minutes, but is still averaging only 2.6 points and 3.1 rebounds in 17.4 minutes. Henderson will face his former team twice next month, first in College Station on Jan. 8 and then in Fayetteville on Jan. 22.

Originally a transfer from Stetson, Iyiola had to sit out his first year at Arkansas and then a torn ACL sidelined him for nearly all of last year, but he did managed to get on the court for two minutes at the end of a blowout win at South Carolina. After the season, he entered the portal again and landed at Hofstra. He started the season with an 11-rebound performance in an overtime loss to Houston, but missed four games – presumably because of injury – before returning to the floor for four minutes off the bench against Princeton on Wednesday. Iyiola will get an opportunity to face his former team when Hofstra plays Arkansas at Simmons Bank Arena in North Little Rock on Dec. 18.

A former top-100 recruit, Jackson began his career at UConn and spent a few years at New Mexico before ending up at Arkansas. However, he didn’t live up to expectations with the Razorbacks, averaging just 3.8 points in 11.6 minutes. Instead of beginning his professional career like Arkansas’ other graduate transfers, Jackson decided to use his extra year of eligibility from COVID by entering the portal again. East Carolina is his fourth school in six years and he seems to have regained his 3-point stroke, as he’s 16 of 41 (39.0%) from beyond the arc through eight games.

Although he’s not technically a transfer, we included Mawein in this piece because he did sign with the Razorbacks. The JUCO transfer was let out of his NLI, though, and instead followed former assistant coach David Patrick to Oklahoma. He’s appeared in just four of eight games with the Sooners, playing a total of 14 minutes and scoring four points. Arkansas will get a closer look at Mawein when it plays Oklahoma in Tulsa on Dec. 11.

In three seasons with the Razorbacks, Sills was a key player and mostly beloved by the fan base for his style of play. He made 47 career starts, including 24 as a sophomore in 2019-20, when he averaged 10.6 points in 31.2 minutes. However, Sills’ playing time dipped in his second season under Musselman and he opted to transfer. He originally announced he’d stay in the SEC by heading to Auburn, but eventually ended up back in his hometown of Jonesboro, transferring to Arkansas State. Overcoming a scary moment in the team’s instrasquad preseason scrimmage that put him in the hospital, Sills has started every game and is the Red Wolves’ leading scorer at 13.8 points per game.

A walk-on from Katy, Texas, Morehead appeared in three games as a freshman at Arkansas last season. He entered the portal and landed at UT-Permian Basin, a Division II school in his home state. Through the Falcons’ first five games, Morehead has played a total of four minutes across two appearances.

Taking advantage of the NCAA’s pandemic-related eligibility relief, Obukwelu – who spent three years at Arkansas as a walk-on after beginning his career at Division III UT-Tyler – decided to transfer down a level and play his sixth season of college ball at Northeastern State, a Division II program in Oklahoma. Through six games, the 6-foot-8 forward has been dominant for the RiverHawks, leading the team in scoring at 19.8 points per game and averaging a double-double with 10.8 rebounds. Not included in those stats was a solid 12-point, 6-rebound performance against Tulsa in an exhibition game.

In his two seasons with the Razorbacks, Chaney started nine games and was a significant contributor off the bench. However, after his sophomore season – his first under Musselman – he decided to transfer. Playing for a Houston team that reached the Final Four, Chaney started 13 games last year. Although he’s started every game this season, he’s averaging just 13.7 minutes.

Embery-Simpson was a four-star prospect in the Class of 2018 and a key contributor off the bench his freshman year at Arkansas. He entered the portal just two days after Mike Anderson was fired and moved back home to play at Tulsa. In his first season eligible to play with the Golden Hurricane, Embery-Simpson started 16 of 23 games and averaged 7.3 points last year. So far this season, he’s been in and out of the starting lineup.

A prolific scorer from Forrest City, Glasper initially chose to walk-on at Arkansas, but missed his entire freshman season because of shoulder surgery. He transferred to Arkansas Tech, where he scored more than 1,500 points in three seasons, and then decided to give Division I another shot by transferring to Oral Roberts. He averaged 11.0 points for the Golden Eagles before an injury sidelined him the final six weeks of the season. Using his extra year of eligibility, Glasper transferred once again and is now at Incarnate Word. Two of his best games so far were against Big 12 foes Baylor and Texas Tech, as he scored 16 and 15 points, respectively, against them.

Despite starting five games his freshman year at Arkansas, Hall entered the portal and landed at DePaul. After sitting out a year, the Little Rock Mills product appeared in 50 games with 16 starts for the Big East program and averaged 4.6 points and 4.4 rebounds. Following last season, Hall entered the portal again and ended up coming back closer to home, where he’s become one of Central Arkansas’ top players. Arkansas fans got an up-close look at him Wednesday, as he scored 12 points and added 3 rebounds and 3 assists in UCA’s 97-60 loss to the Razorbacks.

His unusual tenure at Arkansas lasted only one semester as a midyear enrollee and featured rumors of possibly playing football, but Hill has enjoyed success on the court since leaving. He was an NJCAA first-team All-American at Salt Lake C.C. and signed with Murray State, one of the top mid-major programs in the country. In his second season with the Racers, Hill is third on the team in scoring and has an impressive 34-to-8 assist-to-turnover ratio.

Now in his third season at West Virginia, using his extra COVID year, Osabuohien has been a staple in Bob Huggins’ rotation. He is currently the second guy off the bench for the Mountaineers and continues to do a lot of the non-scoring things he did even at Arkansas. The difference, though, is he seems to understand his role better at West Virginia than when he played under Anderson. After attempting 30 his sophomore year with the Razorbacks, Osabuohien has taken just 8 total 3-pointers during his time with the Mountaineers. He’ll return to Bud Walton Arena on Jan. 29, when Arkansas hosts West Virginia in the Big 12/SEC Challenge.

A Rivals150 prospect coming out of high school, Phillips was limited by offseason meniscus surgery and then appeared in just seven games at Arkansas before deciding to transfer. He landed back home at Texas-Arlington and played in 57 games over the last two seasons. This offseason, he briefly declared for the NBA Draft before withdrawing, entering the portal again and ending up at Detroit Mercy, where he has yet to appear in any of the Titans’ first six games.