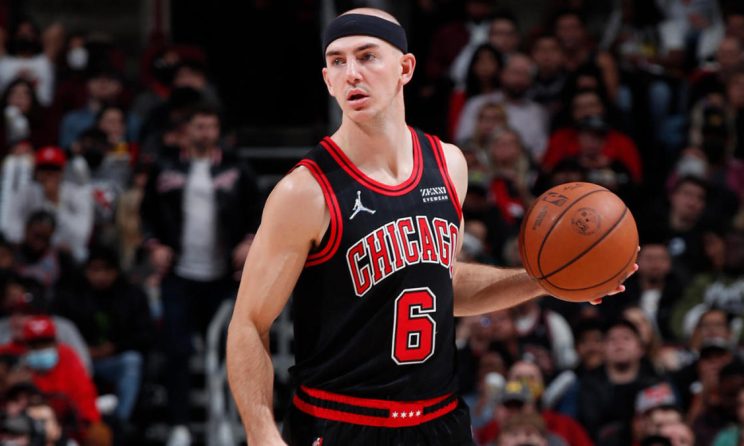 Chicago Bulls guard Alex Caruso will undergo surgery on a fractured right wrist that he suffered against the Milwaukee Bucks on Friday night, and he will be sidelined for 6-8 weeks as a result, the Bulls announced on Saturday.

Caruso suffered the injury on a fast break during the third quarter of the contest against Milwaukee. After the Bulls forced a turnover, rookie Ayo Dosunmu pushed the ball up the floor, but had Pat Connaughton blocking his path to the rim. Instead of trying to challenge Connaughton, Dosunmu turned back and dropped the ball off to a streaking Caruso who went hard to the basket. As Caruso was in mid-air, Bucks guard Grayson Allen came flying in to try and block the shot, but instead grabbed ahold of the Bulls guard and sent him spinning to the ground.

Allen was assessed a flagrant 2 foul and ejected from the game as a result. You can see the play below:

Caruso continued to play in the game, but his wrist was clearly bothering him, and now we know why. Unsurprisingly, Caruso and Bulls coach Billy Donovan were both unhappy with the play, and they expressed their feelings after the game.

“Dude just grabbed me out of the air,” Caruso said of the play, via ESPN. “It’s kind of bulls–t. I don’t know what else you can do about it. I’m just glad that I didn’t have any major scary injuries right away.”

“For Alex to be in the air and for [Allen] to take him down like that, he could’ve ended his career,” Donovan added. “He has a history of this. That to me was really — it was really dangerous. I hope the league takes a hard look at something like that because that could have really, really seriously hurt him.”

“I expect the league will take into consideration not only what was a dangerous, unnecessary, and dirty play on Alex Caruso that caused this significant injury, but also the offending players’ own history,” Lawrence said. “This was a cheap shot on an airborne, defenseless player that resulted in a broken bone that will need to be surgically repaired and will cause Alex to miss at least two months of the season. I am hopeful the league levels a punishment that will send a clear message that there is no place in the NBA for what happened to Alex and the Bulls.”

The good news is that Caruso will return to action this season, but the injury comes at a tough time for Chicago, who is already without Zach LaVine (knee injury) and Lonzo Ball (scheduled to undergo knee surgery). The Bulls currently sit second in the Eastern Conference standings, but they are just three games ahead of the seventh-seeded Charlotte Hornets. With several key contributors now sidelined, it will be difficult for the Bulls to maintain their current playoff positioning.