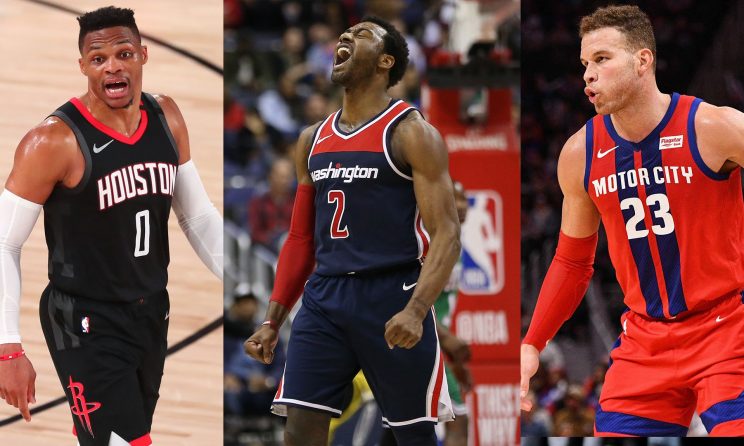 After a report from The Athletic’s Shams Charania that longtime Wizards point guard John Wall demanded a trade following another report earlier in the week that the team was considering trading him, it’s time to brainstorm what landing spots make the most sense for the five-time All-Star. To be clear, this isn’t reporting that they’re in the works. Just a few ideas that could potentially be advantageous for all parties involved.

This is where it all started. According to multiple reports, Wizards GM Tommy Sheppard and the the front office at least discussed the idea of swapping Wall for Russell Westbrook. The reason why a Wizards-Rockets trade makes the most sense is because of one simple fact: Wall & Westbrook’s contracts [basically] match.

Wall and Westbrook both make around $41 million annually — both have three years remaining on their deals as well.

Charania also reported that the deal hadn’t gained much traction because the two sides were having trouble agreeing on other assets possibly being appended to the trade — young player(s), future first round pick(s).

Westbook and Beal would make a quite intriguing backcourt, while a presumable pairing of Wall and James Harden might be even more engrossing.

When in doubt, the Knicks are never out. New York has been on a wild goose hunt for a superstar in Madison Square Garden. While Wall hasn’t played in two seasons, this may be their best shot at getting a player of Wall’s caliber, while also avoiding breaking the bank like they probably would have to for let’s say a healthier Westbrook (who was previously connected to the team, however recent reports say they will no longer pursue him).

New York also has yet to address the point guard position. They were projected to do so in the NBA Draft, however they opted to select the high-flying forward out of Dayton, Obi Toppin. If the season were to start today, New York would be rolling out Frank Ntilikina and Dennis Smith Jr. as floor generals, two average-at-best options.

A mock package could include Ntilikina, Julius Randle and Kevin Knox coming to the nation’s capital. Alongside Wall, Washington would presumably have to send the Knicks a future first to seal the deal.

Wall is returning from an extensive absence due to injury, however his star potential may be a risk the Knicks are willing to explore.

A recent darkhorse, the Pistons have added 1,438 big-men to their roster via free agency. Ok, maybe not literally but they drafted Isaiah Stewart with the No. 16 pick, added Dewayne Dedmon in a trade with the Hawks, traded for Tony Bradley from the Utah Jazz, then signed free agents Mason Plumlee and Jahlil Okafor. That’s five centers added to the roster in three days!

The natural ask would be a package centered around six-time all-star, Blake Griffin. Griffin’s time in Detroit has been muted by his struggles staying healthy, similar to that of Wall’s situation in D.C., and he’s also making around $36.5 million annually. Some other pieces would need to be included for the numbers to match, maybe a veteran guard like Derrick Rose could be included.

Detroit did just select point guard Killian Hayes with the No. 7 overall pick, however having him sit behind an established veteran guard like Wall could be exactly what the organization is looking for to help develop the French 19-year old.